In the early 1900s, Normal City and Riverside were blossoming communities created to expand the City of Muncie. While Normal City was developed in January of 1899, Riverside was developed as a separate municipality in 1918. To gain attraction, the Normal City community offered a free trip to the Columbian Exposition in 1901 in exchange for residency to the neighborhood. Normal City was initially named after the normal school, the predecessor to Ball State University. To gain attraction, in 1899 the school offered people reduced lot sales.

The newly developing neighborhood gained the most attraction through the land incentives and genuine curiosity for the school in Normal City. By 1903, the population consisted of mostly businessmen living in the Riverside suburb. This area was an escape from the increasingly dense downtown atmosphere. The Riverside Historic District would later be added to the National Register of Historic Places in 1999.

Historically, the area’s housing has consisted of three main housing types: bungalows, contemporary homes, and two-story frame homes. Bungalows are typically found south of Jackson Street. This architectural style includes a simple floor plan with rooms opening into one another. Bungalows also had no provisions for automobiles. Contemporary style housing was popular nearest the Hazelwood Christian Church. At this time in the early 1950s, these homes were developed for soon to be retirees. Two-story frame housing was developed south of University Street, between Light and Dicks Street, and were mostly larger homes for bigger households. 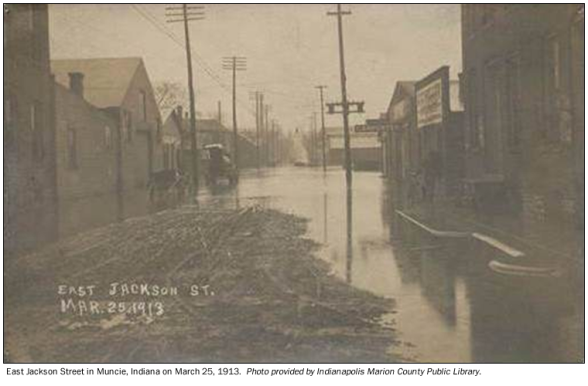 RNC also has a history of natural disasters, the largest of which are related to flooding. The flood of 1913 remains one of the most well-known floods in Muncie’s past. In Muncie on March 23rd, 1912, the White River was at an average level, but a heavy rainfall of 6 to 8 inches fell into the White River between the afternoons of the 23rd and 26th. Late on March 26th rain began to change to snow and by the 27th an additional 1 to 2 inches accumulated. During this period, the White River rose rapidly and by the 26th the river was one foot higher than the previous flood in March of 1904. The river crested nearly 20 feet above the typical water level while the flood waters rose above the local levees and surrounded over 400 residences and businesses. All city water services were shut off and railway communications became disconnected. The Flood of 1913 remains the greatest known flood to strike the Muncie area. 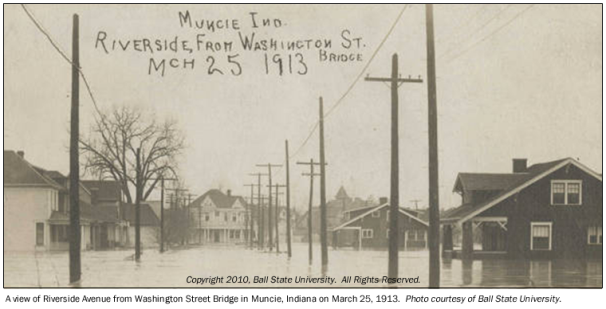 RNC continued to flourish even after Muncie flood protection measures were enacted. The Corps of Engineers majorly modified the White River channel through the heart of Muncie. The Corps also created and improved levees to prevent future tragedies like the Flood of 1913. The White River improvements have kept Muncie and RNC safe to this day.